This week, the Phoenix emergency plumbers at Chas Roberts want to share with you everything they know about water purification. Clean water pumping out of a sink or a hose may not seem like anything special, but there was a time when drinkable water was not as plentiful as it is in our homes today. Even now clean water is scarce in some regions of the world. Phoenix AZ plumbers have a special appreciation for the clean water that some may take for granted. Here is why: 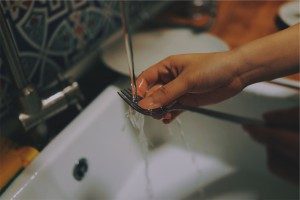 In Ancient Egyptian and Indian texts, the methods referenced for cleaning water were simple yet effective. Leaving water in the sun to boil was a popular method of purification, as was sifting the water through sand to remove harmful toxins.

In Ancient Greece, Hippocrates developed the Hippocratic sleeve, a contraption that resembled a cloth bag. Boiled water was poured through the sleeve to catch large particles and remove them from the supply.

Arabian alchemist Geber relied on water’s cohesion and adhesion by using wick siphons to remove dirt from water. The siphons themselves would catch the particles and the clean water would drip down into a separate vessel.

In Italy in the 1600’s, sand filters inspired by the ones created by Sir Frances Bacon, a Renaissance philosopher and scientist, began to rise in popularity. Italian physician Lucas Antonius Portius further Bacon’s experiments and documented his findings in a work called “Soldier’s Vade Mecum: Or, the Method of Curing the Diseases and Preserving the Health of Soldiers.”

In Scotland in 1804 John Gibb used a sand filter to effectively purify a water supply for the first time. This method became popular among engineers working for private water companies, and it was the inspiration for the first ever public treated water supply.

Today we have a whole set of water treatment methods at our disposal for water purification!

Want input from a Phoenix AZ plumber? Head to www.chasroberts.com to get all your plumbing questions answered. Contact us today if you are in need of a Phoenix emergency plumber!

For all things plumbing related be sure to check out our blog!

Save big by checking out our latest deals and financing options.

If you’re experiencing an A/C emergency, give us a call now. Our services include weekends and holidays with no additional cost.